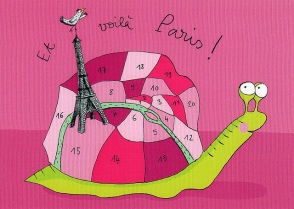 I must have visited Paris a half a dozen times before stumbling upon a clever travel post that showed how the city of Paris curls around the Seine like a giant escargot.

What a revelation.  It explained so much about the left and right banks and the seemingly illogical layout of the 20 arrondissements.  It helped to understand why on earth the lowly snail was the chosen delivery vehicle for the unbeatable combination of garlic, parsley, butter and bread crumbs.

I probably owe my love of all things French to the escargot. The look of pride on my father’s face when I not only ordered them but ate them with relish at the age of 8 or 9 in some continental dining room was not lost on me.

I’ve eaten them out of the shell with those dangerous escargot shell trappers that look as though they were designed for surgical use. Stories abound in French restaurants of escargot flying across gilded dining rooms.  Dipping a crusty piece of bread into the tiny escargot sized swimming pool filled with that buttery juice was the payoff for getting them out of those damn shells.

Back in the day, service d’escargots was a staple on any French bride’s liste de marriage along with a fondue set.   I’ve also eaten them out of a tupperware cup with a toothpick in a communal bar in Marseilles washed down with a murky brown beer brewed on the premises by the two dames who ran the joint.

One of the tenets of fine French cuisine is that the harder you have to work at reaching the tender morsel you wish to put into your mouth, the greater the reward.   Lobster, Oysters and Artichokes come to mind, to name just a few.  A little bit like getting to know and appreciate the French and Paris.

2 thoughts on “Alas We Are Not Escargots”